Steve Jobs was an American businessman and investor who is most associated with the tech company Apple.

Jobs was adopted shortly after being born in 1955 and was raised in California. He attended several high schools before meeting Steve Wozniak at Homestead High School in the early 1970s and co-founded Apple with Wozniak and Ronald Wayne.

After Apple’s initial success, Jobs was ousted from the company in 1985 and went on to found NeXT which focused on making computers for the educational sector. After the company didn’t have the anticipated success, Jobs returned to Apple in 1997 after it bought NeXT for $427 million.

Until his death in 2011, Jobs saw Apple have tremendous success with products such as the iMac, iTunes, iPod, iPhone, and iPad. He also bought Pixar in the 1980s and was the company’s CEO when Disney bought Pixar for $7.4 billion in 2006.

His net worth stood at $10.2 billion when he passed away from complications due to cancer in 2011. 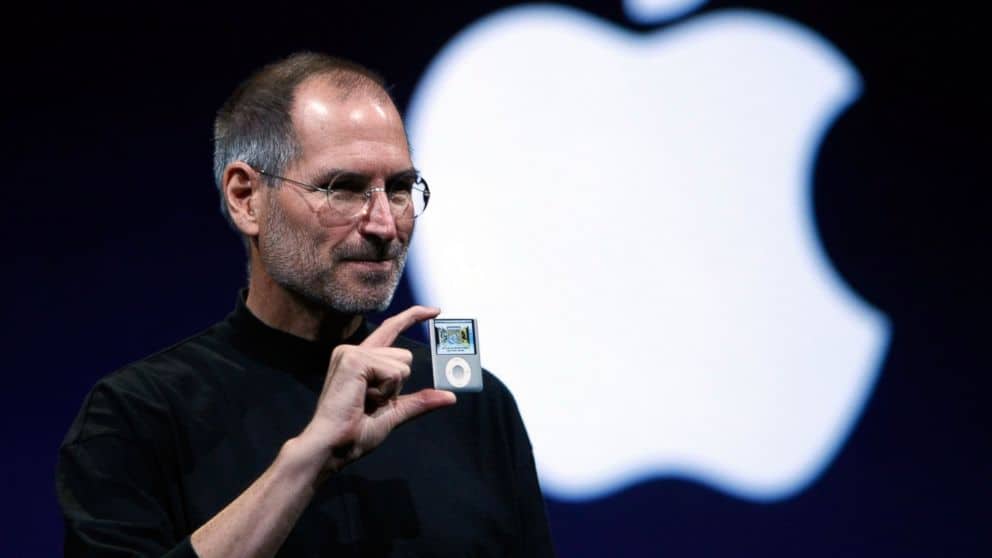 Steve Jobs was born on February 24, 1955, in San Francisco, California.

His biological parents were Abdulfattah Jandali and Joanne Schieble. Schieble left Abdulfattah and re-located in San Francisco after spending time with his family in Homs, Syria, and gave Steve up for adoption shortly after being born.

Paul and Clara Jobs eventually adopted Jobs after a court battle where the couple agreed to play for Steve’s college education.

He was raised in California and had a stable childhood where he attended several high schools before graduating from Homestead High School in 1972. During his time at Homestead, Steve became friends with future Apple employee Steve Wozniak through a mutual friend. Jobs would visit Wozniak when Wozniak attended the University of California, Berkeley, and he began to get involved in Stanford University’s student union, which was close by.

Jobs studied at Reed College in Portland, Oregon; however, he dropped out after just one semester.

In 1974, Jobs was hired as a technician by the video game company Atari before embarking on a trip to India. Jobs returned to Atari in 1975 and created a circuit board for the arcade video game Breakout while he also attended the Homebrew Computer Club.

Wozniak worked on the circuit board for Atari, and Jobs agreed to split the fee if he could reduce the number of chips in the design. According to Wozniak, Jobs only gave him $350 for the circuit board design when Jobs had been given $5000 from the company.

Steve Jobs will be forever associated with Apple.

In 1976, Wozniak had created the first design for the Apple 1 computer, and the Apple Computer Company was born in April of that year. Initially working out of Jobs’ bedroom, they moved into the garage, and they produced 200 original Apple 1 computers.

The Apple 2, which was released in 1997, became one of the most popular mass-produced microcomputer products, and the company’s revenues grew to $2.7 million. In 1980, Apple went public after an extraordinary $117 million in sales, and by the time Jobs was 25, his net worth stood at $250 million.

The introduction of the Macintosh in 1984 didn’t have the success that was anticipated. The computer suffered from slow processing speeds and limited software options, and it failed to compete with the IBM PC.

Jobs was forced out of Apple in 1985 and sold off 99.999% of his shareholding, which landed him $100 million. Jobs kept a single share because he wanted to continue to receive the company’s annual reports.

After leaving Apple, Jobs founded NeXT, and the first computer (with a retail value of $9,999) was launched in 1990. The NeXT computers were predominantly aimed at educational institutions; however, they had sold only 50,000 computers by 1993. The company did start to make a profit in 1994 ($1.03 million) but didn’t achieve the success Jobs craved.

By 1996, Apple purchased NeXT for $427 million, and Jobs was back at the company he founded 20 years previously.

A revitalized Steve Jobs turned Apple around, and releases such as the iMac in 1998 and then the iPod in 2001 propelled the company to new heights.

Apple’s most tremendous success was yet to come, and iTunes (launched in 2007) and the iPhone (the same year) have generated billions of dollars of company revenue. Other products such as the iPad have sold hundreds of millions of units worldwide.

By the time of his death in 2011, Jobs’ net worth had skyrocketed to over $10 billion. However, only some of this was down to Apple. Jobs was a majority shareholder in Pixar and became its CEO after purchasing the company from George Lucas in 1985. With Toy Story and other significant films bringing Pixar to the forefront of the industry, it was acquired by Disney for $7.4 billion in 2006.

Find out the history of Steve Jobs’s life and career, including starting Apple, leaving the company, and eventually coming back to revitalize the brand.

Watch Steve Jobs’ last interview as he talks to Walt Mossberg and Kara Swisher at the All Things Digital: D8 Conference in 2010.

Steve Jobs talks about Apple vs. Android and how centralized security with the Apple App Store is a better system to prevent hacking..

Even though Steve Jobs is remembered alongside Apple’s massive success with products such as the iPhone, iTunes, and the iPod, he has had several failures along the way.

The Apple III, released in 1980, was not a commercial success, and it is was the first Apple computer that Steve Wozniak didn’t design. It suffered many issues, including heating up too fast.

NeXT is seen as another failure for Jobs. The high cost of the machines and the fact that only 50,000 units were sold overall were incredibly disappointing. However, it was acquired by Apple for several hundred million dollars, and the NeXTcube was the computer used by Tim Berners-Lee as the first server on the World Wide Web.

Some other business failures that Jobs suffered throughout this career include the Apple Lisa and, of course, being ousted from his own company in 1985.

Paul and Clara adopted jobs shortly after being born.

Steve Jobs was in a relationship with Chrisann Brennan in the early 1970s, and they had one child, Lisa Brennan-Jobs.

Steve Jobs had a distant relationship with both Chrisann and Lisa and denied he was the father until a DNA test confirmed it. He did begin to have more of an active role in Lisa’s life, mainly after Jobs left Apple in 1985.

Lisa described Jobs as “mostly distant, cold and made her feel unwanted” and said that he initially refused to pay her college fees even after his enormous financial success.

Jobs would marry Laurene Powell in 1991 after they met each other while he was giving a guest lecture at Stanford University, where she was a student. They had three children together (Reed, Eve, and Erin Sienna). 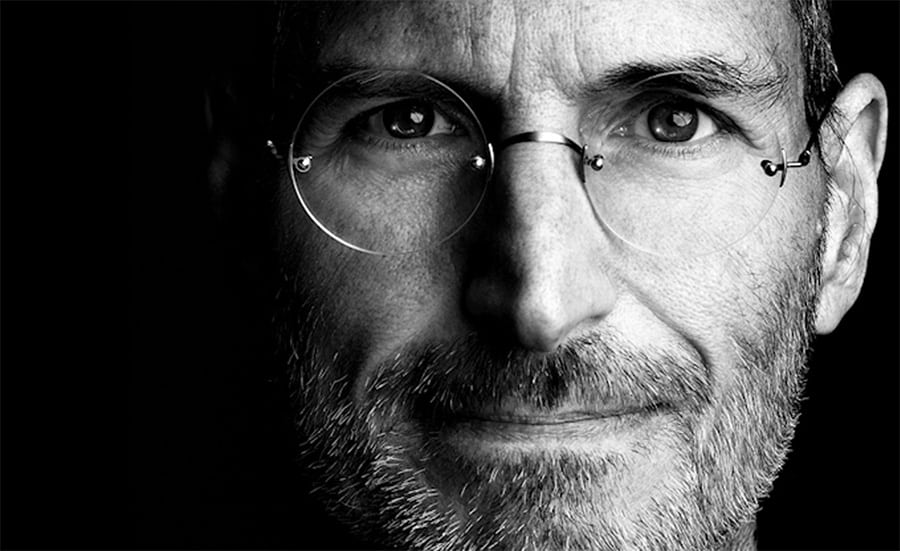 His widow, Laurene Powell Jobs, inherited his wealth (including shares and other assets) and is worth around $30 billion.

Steve Jobs bought Jackling House in 1984, a 17,250-square-foot mansion that was built in 1925. He lived there for 10-years and owned it up until his death, although Jobs dedicated much of his time to demolishing the historic building fighting with preservationist groups along the way. He finally succeeded in toppling the mansion in the year of his death, 2011.

After Jobs got married to Laurene Powell, they relocated to Palo Alto and bought a 5,768 square-foot,1930s Tudor-style home.

“The people who are crazy enough to think they can change the world are the ones who do.”

“I’ve always been attracted to the more revolutionary changes. I don’t know why. Because they’re harder. They’re much more stressful emotionally. And you usually go through a period where everybody tells you that you’ve completely failed.”

“Getting fired from Apple was the best thing that could have ever happened to me. The heaviness of being successful was replaced by the lightness of being a beginner again. It freed me to enter one of the most creative periods of my life.”

“That’s been one of my mantras—focus and simplicity. Simple can be harder than complex; you have to work hard to get your thinking clean to make it simple.”

Question: When did Steve Jobs die?

Answer: Steve Jobs died on October 5, 2011. He was 56 years old. Jobs had been suffering from a pancreatic neuroendocrine tumor and died from respiratory arrest.

Question: What was Steve Jobs’ net worth?

Answer: Yes. Steve Jobs married Laurene Powell in 1991, and they had three children together (Reed, Eve, and Erin Sienna).

Answer: Jobs was raised as a Christian, although he had many links to Zen Buddhism in his adult life. Jobs said that Buddhism inspired many of Apple’s most famous products and designs.

Answer: Steve Jobs bought Pixar in 1986, and he purchased the technology rights by paying George Lucas $5 million. A lot of Jobs’ wealth came from Disney buying Pixar in 2006 for $7.4 billion, and he became the largest individual shareholder in Disney.

Question: Where did Steve Jobs live?

Answer: Steve Jobs owned a home in Palo Alto in the Californian San Francisco Bay Area. He moved there with his wife, Laurene Powell, and bought a 5,768 square-foot,1930s Tudor-style home.