The internet has opened opportunities for buyers and sellers to connect across the globe. This does not only apply to commodities as people can also offer services. A huge driving factor behind this is the rise of marketplaces that allowed sellers to list what they have in store and buyers to find what they need.

While we have different listing platforms, we will break down one popular one; Craigslist , and uncover the business model that gives the company enough revenue to run and sustain operations.

Craigslist is a classifieds site. Users can list just about anything, including services, jobs, or items available for sale. Once someone sees a listing they are interested in, they can get in touch with the individual who listed it, using the contact information available on the portal, and then agree on the price or any other detail.

Besides these listings, Craigslist has a forum where users engage on various issues about the platform and other external matters.

Craigslist offers listings by location, even if it is available to over 100 countries globally. Every user across the globe can access a tailored version of Craigslist, depending on their location.

This helps to connect people in a specific location to services or commodities in that area. You can easily browse through other areas, but the default page will get you specific to your location.

Craigslist has retained its initial design launched when it was established to date. Those who want a modern and intuitive design can download the mobile applications available on Android and iOS . 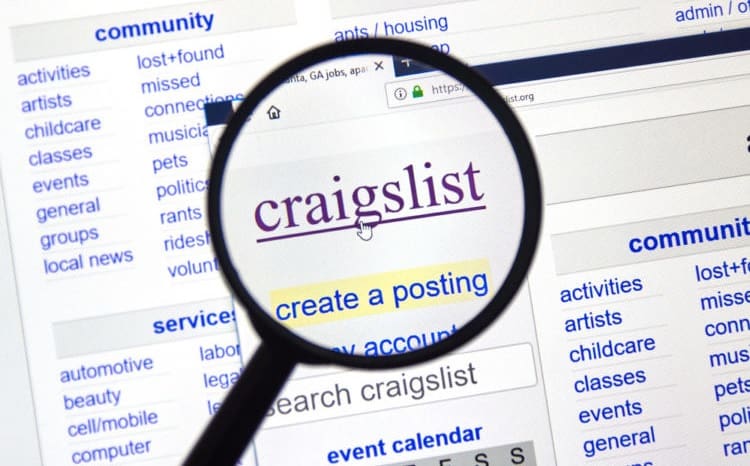 Craigslist was founded in 1995 by Craig Newmark. It has its headquarters in San Francisco, California. Newmark was a computer enthusiast who spent over 15 years in the early days of his career at IBM assisting customers as a tech support engineer.

In 1993, he switched to Charles Schwaab and relocated to San Francisco. He started getting connections in this town by many computer programming events locally. Since their friends were interested in these events, he created an email list to notify everyone about any upcoming events.

It was more of a hobby, but it grew on its own and started serving other purposes. People on the list began to post other content, while others started buying things from each other.

Due to the high traffic, people’s inboxes became cluttered since messages and posts were flying from every corner. To manage this, he developed a simple website that would organize the posts and make it easy for people to find what they are looking for.

The site was registered under the .org domain since it was set up as a non-profit. However, people continued using it for commercial purposes, which did not do the non-profit tag any justice.

One top user at this time was Christina Murphy, who relied on the site to recruit people in the technology niche. She had a lot of back and forth communication with Newmark due to some of her job postings being messed up. She initiated discussions with Nancy Melone, an IT consultant, to establish a more professional base for Craigslist.

The three launched a non-profit called List Foundation, where recruiters would post job listings for $30 per ad. Melone was the CEO, and for almost a year, users could access the site through the List Foundation domain and the original craigslist domain.

However, Melone disagreed with Newmark on certain things, most notably on the company’s direction. Melone had the vision to grow the company in light of other similar entities were quickly getting VC funding at the time. On the other hand, Newmark was still intent on the original vision and wanted to retain the prices charged for each ad.

They eventually parted ways, and in 1999, List Foundation was rebranded to MetroVox, while Craigslist remained independent. The co-founders went ahead with this move without involving Newmark, and he discouraged his loyal users from using this link, which worked.

The users had established a long-term relationship with Newmark, and they moved back to Craigslist, leading to the downfall of Metrovox a few months later.

To avoid similar issues, Newmark decided to turn Craigslist into a commercial business. He appointed Buckmaster as CEO. Buckmaster had joined the company as a software developer in 2000 after Newmark came across his CV on the platform.

Before his appointment, he worked on various tasks on Craigslist, such as improving the search function, and only learned the skills to lead on the fly.

Craigslist grew in the following years, most notably hitting 1 billion monthly page views in August 2004. At this time, eBay invested $32 million in an exchange for 28% of the company stake, which was a key milestone in the company’s history.

With this financial backing, it expanded to more cities across the United States and eventually moved to other countries globally. As expected with any company on the rise, Craigslist started facing a few challenges. 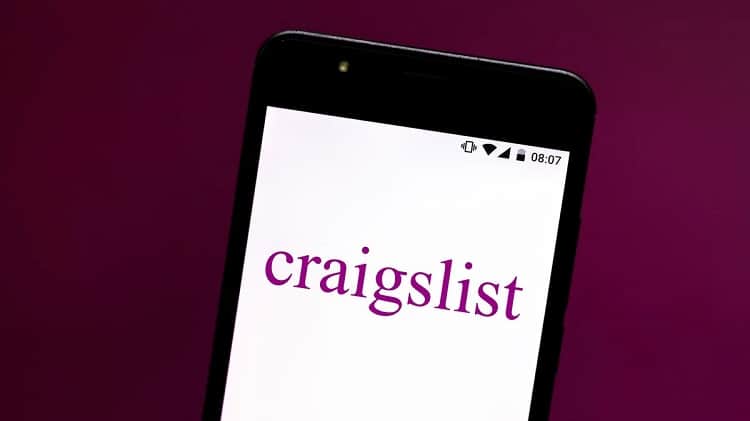 Craigslist implemented a few changes to protect its position in the market, as it tried to recover from this hit. One included changing the terms and conditions that made the firm an exclusive owner of content on its platform.

It stamped its authority on this matter by suing 3Taps and Padmapper for using classified data without its consent that year. The company learned from the experience with Padmapper and launched a feature where users could see the location of apartments in the city on a map-like interface.

From 2010, different businesses started investing in some verticals; Craigslist had established its name as an authority. Examples include Airbnb in rentals , Tinder for dating , and OfferUp for sales .

However, the site continues to receive lots of traffic, something many attributed to the company’s simple and consistent design. The hyperlocal approach was also crucial since it had established a presence across the globe but retained the localization aspect.

The leaders moved to secure control of the company, first by buying back the stake eBay had . It put a halt to most of the wrangles between the two companies.

This was mainly triggered by the move by eBay to open a separate classified site in 2007, which Craigslist prompted to dilute the shares they had in the company. This newly acquired control prompted Newmark to engage in various CSR projects and contribute generously to fund various causes.

The significant moves That Craigslist Introduced to the 21 st century was the launch of mobile apps, Which hardly have any updates received.

Craigslist is one of the most visited websites worldwide, with over 400 million monthly views, while being available in over 70 countries globally.

The whole Craigslist revenue model relies on Peer to Peer interactions. A company that has successfully implemented this model is Airbnb. This implies that just about anyone can view advertisements on the platform, irrespective of their location globally. This strategy aims to increase the flow of traffic to the website.

The sites get new users and potential buyers who will be interested in some of the things listed there from this traffic. The forum is also vital, as it drives referrals, opening up new opportunities for users to sign up. All these aspects combined drive up the platform’s usage and consideration to those who have never visited it.

The huge focus on local is also essential since it reduces the chances of fraudsters extorting users on the platform. It aims to bring people living in one area together and encourage users to market their offerings to those within proximity. Note that users can view listings in other areas, but this is not recommended.

How Does Craigslist Make Money? 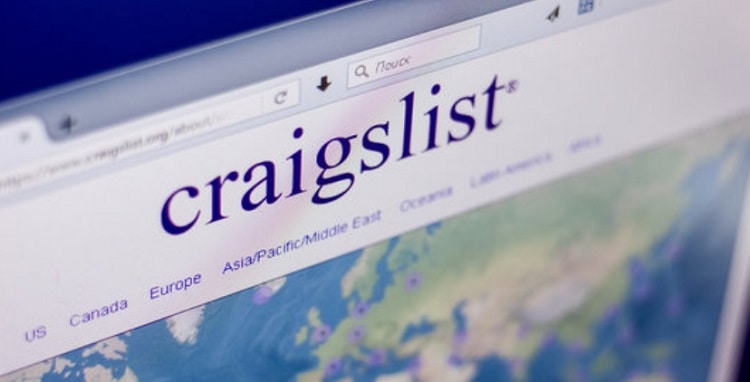 Craigslist operates on a freemium model, although not entirely. Most of it is free as it only charges a fee on selected ad categories. This explains why the newspaper industry is not amused by the company, as people looking for low-cost platforms to post ads can do it for free. Some of the categories where users must pay include;

While many have recommended that Craigslist diversify its offerings to increase revenue streams, it still manages to bring in significant amounts of money from these categories.

The company stays true to its promise, and this has retained the popularity and huge traffic it receives month on month, despite the disruption seen in the verticals it specializes in.

Answer: Craigslist is a profitable company, despite the rise of other players in the listings industry. It has a strange approach, focusing on the original design and outlay of the listing website while charging a small amount on selected categories. The company has never raised a penny from investors and notably earns over $600 million in profits year on year.

Its profit margins are high, thanks to the low operating costs as a team of only 50 people run the website. All these factors combined make Craigslist a profitable venture with a big reputation as it continues to receive many monthly page visits.

Question: Does Anyone Use Craigslist Anymore?

Answer: It is easy to assume that Craigslist is not used anymore since it does not invest in large marketing campaigns that hit global headlines. This is also considering other listing services like eBay, Letgo, Swappa, and Oodle that seem to take up more customers. Craigslist came up 8th in the 2020 Sellers Choice Awards, which is impressive looking at how it sticks to the old interface and has not received any financial backing.

Most of the sentiments behind this point to ease of use and affordability. Sellers say Craigslist is the best for selling locally, especially for items that are too heavy to ship.

Question: Does Craigslist Take a Percentage of What You Sell?

Answer: Craigslist charges a fixed amount for specific categories of advertisements put on their platform. Besides this, it does not charge a commission of the total amount generated from the sale. Besides the highlighted categories, the rest of the advertisements are free.

Craigslist is an interesting listing company, looking at its business model that is somewhat opposite to what many other big companies are doing. They have resisted the option to follow the trends and choose to remain true to their original vision and foundation principles.

It is still a global listing giant, with a huge reputation, despite investing very little in the glamorous marketing campaigns we see on various media every day. Its primary revenue source is from money paid by people listing advertisements in the selected categories, and it keeps its running costs low to generate good revenue margins.

It is an outlier, and it is always great to see such companies succeed despite the noise around them. However, things are shifting rapidly in this space.