The internet revolutionized the way we do things. It is no surprise to see that most of the top companies now provide their services over the internet or took advantage of this globalization to come up with a new product or service.

In the early 2000s, two separate sets of people had an idea. What if people could order takeout online? This idea branched into two companies called Seamless in New York and Grubhub in Chicago.

This piece will break down Grubhub’s business model and bring to light how this company makes money;

Grubhub is an online food ordering and delivery marketplace. Subscribers can order food from over 300,000 restaurants spread across 4,000 cities in the United States.

This company does not own any restaurants but partners with independent ones to offer customers a wide variety of food options to choose from. Its collection ranges from globally acclaimed franchises like McDonald’s to small local shops that serve small to geographical areas.

When a customer orders food, they interact with both Grubhub and the restaurant they are ordering food from. Food preparation is left to the restaurant, and Grubhub handles the rest, depending on the arrangement.

It works with multiple contractors to deliver food on-demand basis. In some cases, the restaurant may make the delivery if it has its delivery fleet.

More importantly, Grubhub handles payments and the presentation of restaurants on its platform to the customers. Its dedicated customer service team is always available to deal with any arising issue. Loyal users off this platform can join a premium membership plan called Grubhub plus that gives them discounts on delivery costs and other perks.

Its market share has been declining from 66% in 2016 due to the entry of various players like Uber Eats, DoorDash, and Postmates in this niche. Today, Grubhub is no longer the leader in the online food delivery niche, as will be explained below. 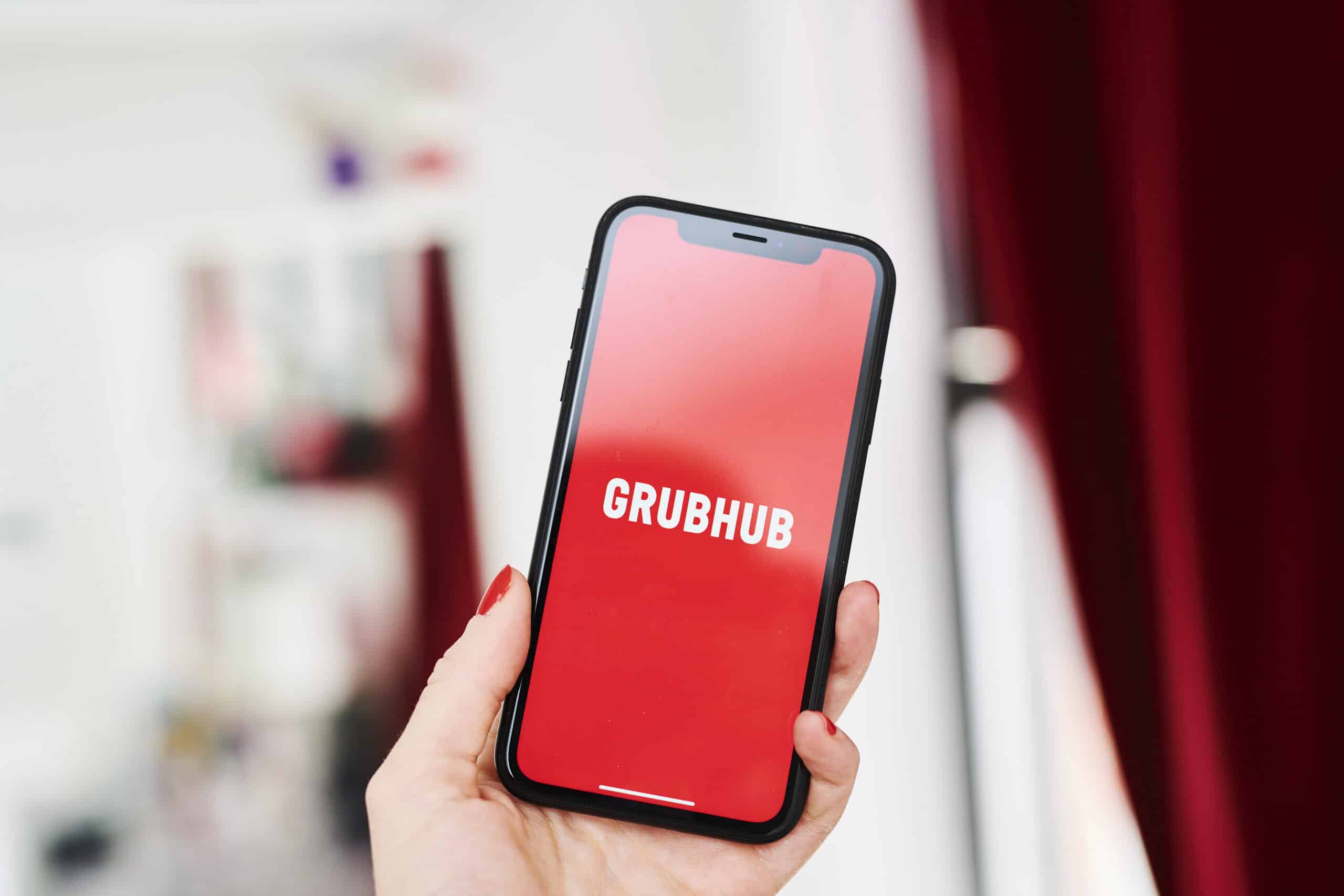 The founders of Grubhub, Matthew Maloney and Mike Evans were working as developers for Apartments.com in the early 2000s. While in the office, these two were continuously frustrated by their food ordering experience.

At their job, they were developing a feature where people could search for apartments on a geographical map-like interface like present-day Google Maps. They quickly figured out that this feature could come in handy to solve the problem with the analog food delivery niche.

They quickly started working on Grubhub and launched it in 2004. To increase the options on the platform, they moved around Chicago collecting menus from different restaurants and populated them into the system.

In the early days, the company had a display advertising model borrowed from the real estate space, and startups were selling advertisements on their websites. In addition, Grubhub charged restaurants $140 for six months of ad placement bill on their site.

The caveat was that most of these restaurants had already engaged other developers and paid them lots of money for low-quality sites. They were skeptical of engaging another platform where they had to pay.

This shifted the platform’s business model to a commission-based approach where restaurants paid an amount from the total obtained from food sales through Grubhub. Many restaurants welcomed this move, and the owners onboarded thousands more in the following months.

In 2007 the company was growing rapidly, and it opened a new location in San Francisco. This put them on the radar of Silicon Valley investors, which led to its first venture capital funding worth $1.1 million.

The launch of the Android and iOS app was another reason why the platform grew this fast. Grubhub was the first online food delivery platform to have an application. This afforded it some exclusivity as any customer looking for such a service would automatically download Grubhub as the first option.

Grubhub received more funding in the following years and continued to add customers to its business. By 2010 it had sent in over $85 million in orders to the restaurants and had over 100 employees. Besides, it enjoyed the reputation of being the leader in the online food delivery industry.

It did not slack in matters of innovation and was one of the first companies to give restaurants an application and an accompanying iPad to let them accept or decline orders.

One key strategy Grubhub has utilized over the years is strategic mergers and acquisitions of other players in the food delivery industry. It is known for buying online food delivery startups, including Dashed, Eat24, LevelUp, and LABite. Grubhub has acquired thirteen different brands since it was founded.

However, its headline major merger was announced in May 2013 when it combined forces with Seamless. The joint venture brought in over $100 million revenue in 2012 once launched as Grubhub Seamless. Seamless was established by two lawyers in 1999 and was very strong in New York City.

On the other hand, Grubhub was popular in the Midwest part of the United States since it was launched in Chicago. The combination was an instant success, and it culminated in the company’s IPO in April 2014.

This helped them raise $92.5 million, with the business being valued at $2.7 billion. At this time, it had reverted to its original name Grubhub to maintain brand distinction.

After the IPO, Grubhub started facing stiffer competition known as the food delivery wars. Amazon launched Amazon restaurants, and soon after, other notable competitors such as DoorDash, Postmates, and eventually Uber eats launched their services. These companies facilitated the delivery services through a fleet of independent contractors who signed up, a model that was very popular with the smaller restaurants. During the IPO time, Grubhub did not have its delivery fleet, and it relied on the restaurant to get the order to the customer. It focused on promoting restaurants only.

While GrubHub’s model was the most efficient one for any company, the pressure exerted by the players in this niche and the rate at which they are growing forced it to change. Eventually, this became the norm in the online food delivery niche.

While the owners quickly rejected those claims, it took a toll on Grubhub’s reputation. That same year the company was caught purchasing over 23,000 domain names similar to the restaurants on the marketplace. DoorDash was fast approaching, and it eventually dethroned Grubhub in U.S monthly sales in May 2019.

This led to a steep decline in the company’s market share. Uber had plans to buy the company in 2020, but regulators did not allow this to happen. Eventually, Uber bought Postmates for approximately $2.65 billion.

In June 2020, Grubhub was acquired by Just Eat Takeaway.com for $7.3 billion, which created the world’s largest online ordering services outside China. Today, the company operates with seven offices across the United States while getting over 27 million orders annually.

How Does Grubhub Make Money? 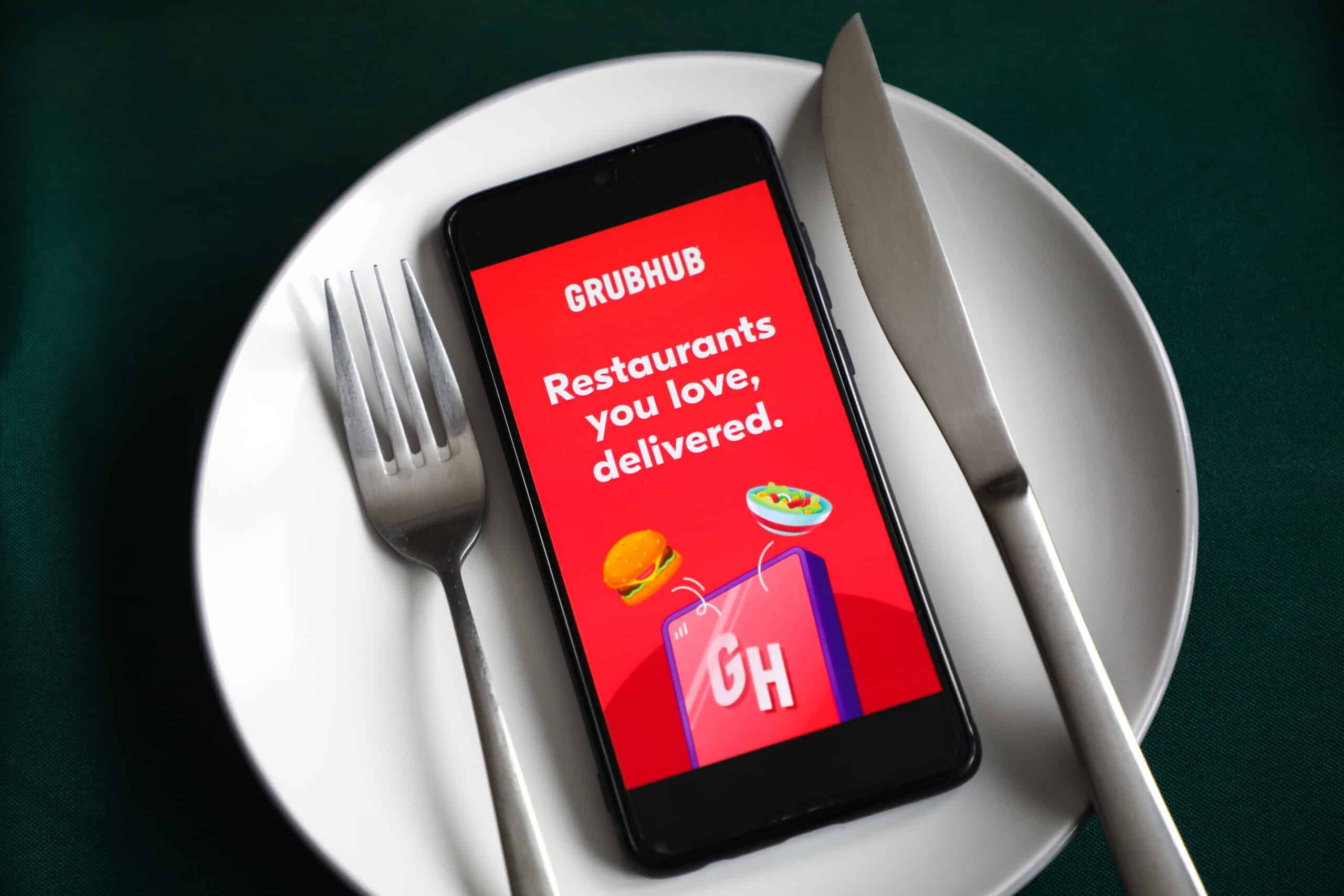 Grubhub’s primary source of revenue is through the commissions they charge restaurants and their premium subscription plan.

See also: How Does Honey Make Money : Is It Safe?

Grubhub charges restaurants a commission on the total amount of orders fulfilled through its platform. The percentage is applied to the total order amount and is divided into various sections, namely;

This comes into play when a customer makes an order through Grubhub’s platform and not directly to the restaurant. This amount is charged on the cash paid for the food. If the restaurant offers its delivery option, the fee is applied to the total cost.

This is charged if Grubhub delivers the food to the customer. It is calculated at 10% of the total cost of the order. In this scenario, the restaurant is not allowed to charge the customer any delivery fee.

Grubhub owns the platform and is responsible for giving restaurants exposure to customers. With a platform with over 27 million users, Grubhub charges a fee in exchange for this exposure. The structure is tiered, and the more a restaurant pays, the more exposure they get on the platform.

This applies when customers order through Grubhub’s telephone service. It is believed the rate is almost like the prepaid order fee charged when one makes an order through the platform.

This amount is used to facilitate the payment and depends on the channel they use to pay. Grubhub has to pay the payment processing company an amount, and this is charged to restaurants. They are at about 3.05%, with an additional 30 cents as fixed fees.

Restaurants have an option to get all their payments processed within the same day and transferred to their accounts. Usually, it takes a few days to get the payments in their accounts free of charge. For this expedited option, they pay a $1 fixed fee.

This is a premium service available to loyal customers. They pay a fixed fee of $9.99 per month for unlimited free deliveries and a 10% cashback. Other perks included in this plan include Elite Care for support and matching donation options. This plan was launched in 2020 to match what the competition was offering.

Question: Why are Grubhub Fees so High?

Answer: The restaurants must pay Grubhub a percentage of the order since customers use their platform to make the order. The fees are high since they eat up some of the profits raked in by the restaurants. For those that process huge volumes, these percentages could sum up to significant amounts.

Question: How Many Hours do Grubhub Drivers Work?

Answer: Driving for Grubhub is considered a part-time gig, and contractors can work for as long as they please. Most drivers do an average of 40 hours a week or more, but it all depends on the number of orders coming in at any point. It is possible to be logged in, but you won’t make as much money as expected if orders are not enough.

Question: Is there a Monthly Fee for Grubhub?

Answer: It depends on the plan you select. The regular Grubhub plan is free of charge, and you do not have to pay anything to make orders. The paid plan is called Grubhub plus and charges a fee of $9.99 per month plus tax. However, new subscribers are eligible for a 14 free trial, after which they can opt to pay or cancel the subscription.

Grubhub is facing exciting times, looking at how many players threaten to take over the limited online food delivery market share. Some of these are backed by global companies, and with a relatively simplistic business model, this is not expected to change.

However, Grubhub has managed to steady its ship following its acquisition and still benefits from its reputation as the leader in this space. With a few radical changes and innovations, it should find a way to gain control of this challenging niche and stamp its authority as the go-to company for online food deliveries.