Ben & Jerry’s mission statement is unique in that the company actually set itself three distinct yet interlinked missions.

Obviously, that’s a lot to unpack, which is why I’ve put together this in-depth Ben & Jerry’s mission statement to help you get a better idea of the company’s aims, objectives, and overall strategy for success.

While having a three-part mission may seem somewhat disparate and disjointed at first, all three missions are intrinsically linked to the idea of doing the best and least harm for everything and everybody that their company impacts.

This means not just their customers and employees, but the communities they operate in, their supplies, stakeholders, and, yes, the very planet we live on.

To best outline how this theme of doing good runs throughout Ben & Jerry’s purpose-driven mission statement, it’s best to look at each of its three aspects in turn. 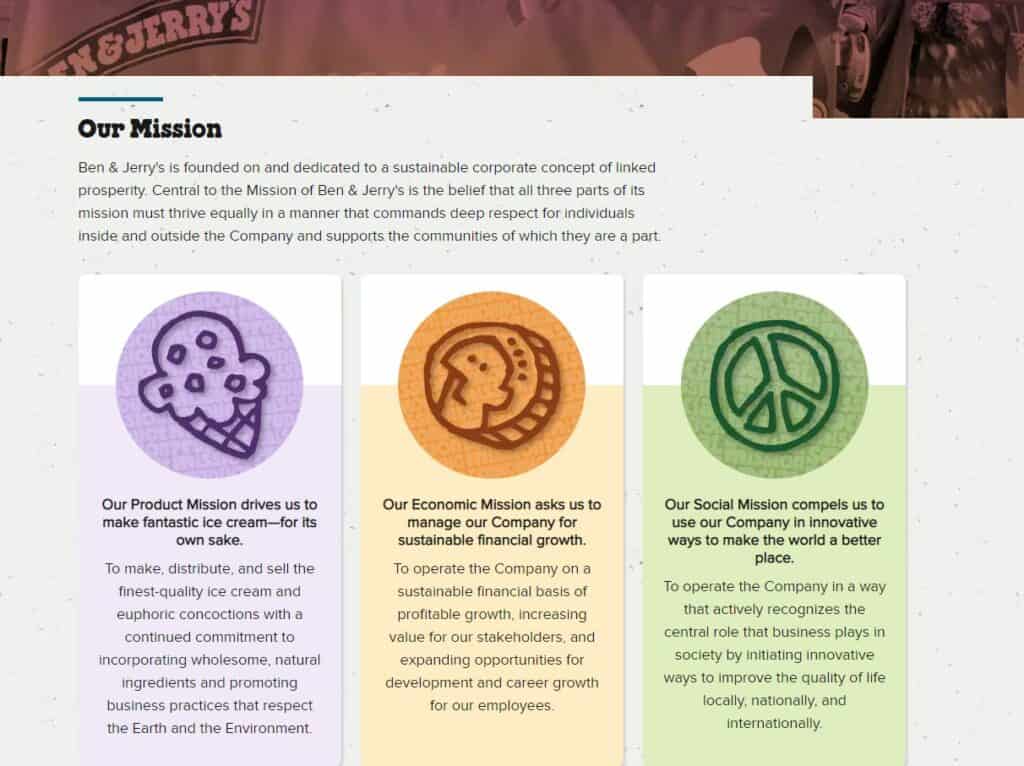 On their website, Ben & Jerry’s sum up their product mission by saying that it’s about “mak[ing] fantastic ice cream – for its own sake.”

In other words, this isn’t purely about profits. Yes, profits are important if the brand is going to achieve its Economic Mission, but by taking those out of the equation when it comes to making their signature products, Ben & Jerry’s can really be focused on making the very best possible ice cream.

Yet, that’s not all you get with the brand’s Product Mission.

“To make, distribute, and sell the finest quality ice cream and euphoric concoctions.”

In our recent guide to the best mission and values statements, we discussed how all good mission statements should have three clear parts:

This part of Ben & Jerry’s statement clearly addresses the first part. It’s clear, concise, and leaves you with no doubt as to the brand’s raison d’etre – they’re here to make great ice cream.

Notice the part about “euphoric concoctions”?

That further enhances this idea that the brand really is focused on quality, not just on the products, but on the kind of experiences customers have while enjoying those products.

Some might argue that this is a little too aspirational or unrealistic. After all, how exactly do you measure whether something is “euphoric” or not?

Still, whether it’s realistic or not, it does tell you that Ben & Jerry’s has set the bar exceedingly high.

There’s another part of Ben & Jerry’s Product Mission that is every bit as important as their focus on quality products and experiences.

That part is this:

“With a continued commitment to incorporating wholesome, natural ingredients and promoting business practices that respect the Earth and the Environment.”

Remember how I said that everything Ben & Jerry’s does is underpinned by a drive to do good? Here, you see this very much reflected in their product mission.

The company isn’t content to make the best ice cream by any means necessary. They’re well aware that what they do impacts the environment and strives to make that impact as positive as possible by using natural ingredients and business practices that reduce environmental damage. 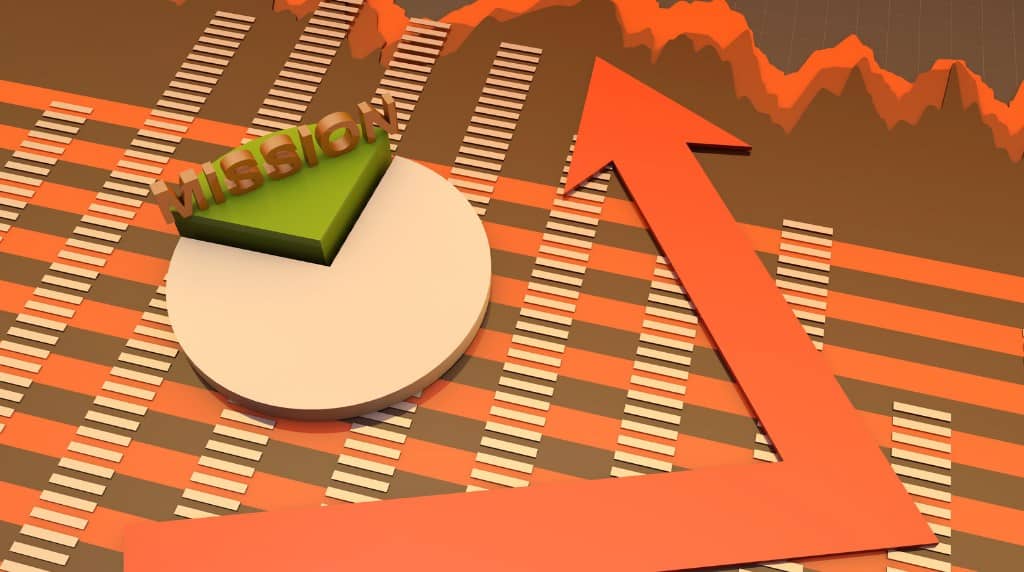 Ben & Jerry’s are hardly unique in having an economic mission focused on growth and financial success. To one degree or another, almost every for-profit business in existence is motivated by growth.

However, it’s the way that the company approaches these economic goals that set them apart.

Consider Adidas, for example. The sports brand set its mission as striving to gain pole market position for its own sake and for the sake of maximizing revenues.

With Ben & Jerry’s, things are done a little differently. This isn’t a company that is concerned about financial success for the sake of financial success, but rather for the impact that success can have.

Consider the words of their Economic Mission again:

“To operate the Company on a sustainable financial basis of profitable growth, increasing value for our stakeholders, and expanding opportunities for development and career growth for our employees.”

What they’re saying here is that this is less about being profit-driven and more about being purpose-driven, using their profitable growth to provide value and opportunities for the people impacted by their business, whether that’s stakeholders or employees.

Again, this all links back to this inherent drive to good, though nowhere is this drive more evident than in the brand’s third mission. 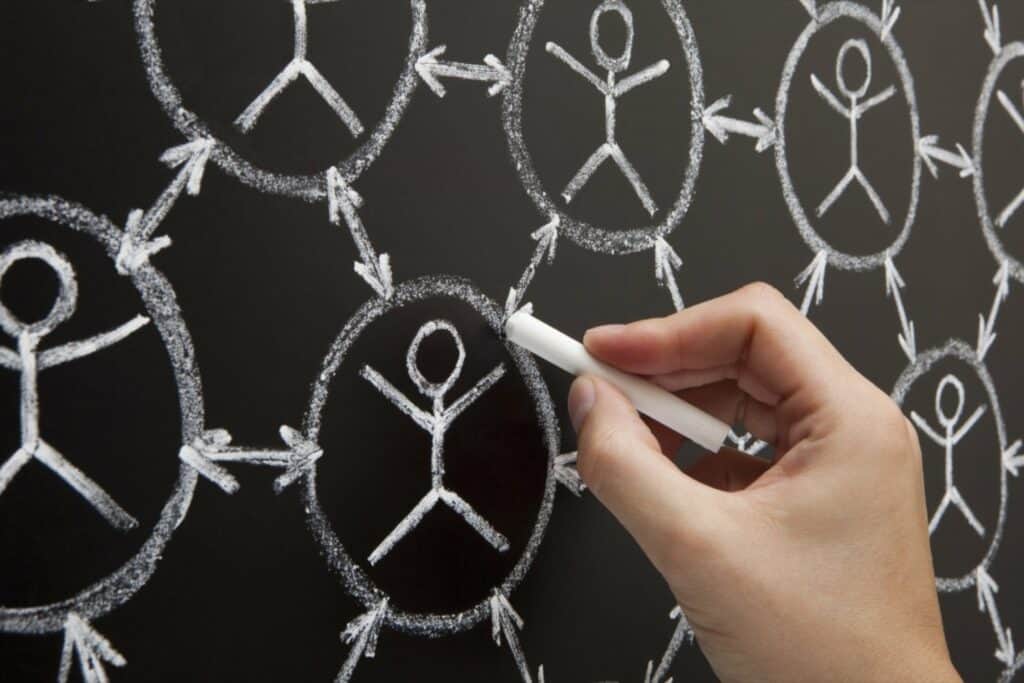 With this part of their mission statement, Ben & Jerry’s are letting it be known that they are a company with a conscience. They understand that what they do has a far-reaching impact beyond their factory walls, and they take the responsibility of managing that impact very seriously.

“…by initiating innovative ways to improve the quality of life locally, nationally, and internationally.”

Broadly speaking, this outlines how the company carries out its Social Mission. As we’ll discuss later, Ben & Jerry’s envisions itself first and foremost as a social justice company, which means this part of their mission statement really underpins everything else.

It even impacts the way that the company goes above and beyond to support social and environmental issues such as criminal justice reform, LGBTQ+ rights, climate justice, and refugee rights.

“Making the best possible ice cream in the nicest possible way. Using business as a tool for social and environmental change.”

Ben & Jerry’s doesn’t have a defined vision statement in the way that other brands do, but this line about making the best possible ice cream in the nicest possible way comes up time and time again in discussions about what the company sees as its key goals and objectives.

In one sense, this perfectly encapsulates the brand’s entire ethos, mission, and values in one neat and tidy sentence. 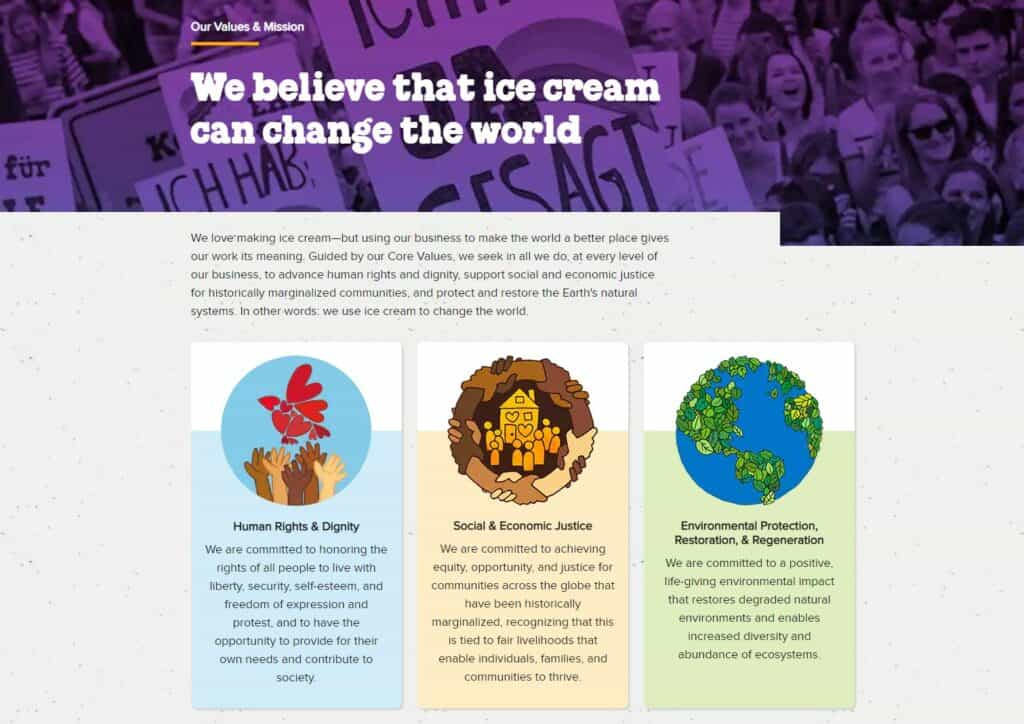 They take them very seriously and incorporate them into everything they do.

What’s more, the brand thinks outside the box a little, eschewing typical catchy values like “honesty” and “diversity” in favor of what they call “progressive values.”

The brand notes that the gap between rich and poor is wider now than it has ever been in the last 100 years and note that they are taking steps to actively address that by “creating opportunities for those who have been denied them” and fighting for economic justice.

Ben & Jerry’s note that the very nature of what they do means waste will be generated. They list a commitment to minimizing their own negative impact on the environment as one of their primary concerns.

They also note their promotion of “sustainable and safe” methods of food production.

Ben & Jerry’s values see them committed to causes such as human rights and dignity, social and economic justice, and environmental protection.

They believe in using their business as a tool to do good in the world, to promote justice for all, and encourage a degree of harmony.

Question: What is Ben & Jerry’s strategy?

Answer: Ben & Jerry’s strategy is to set themselves apart by being a “social justice company that makes ice cream” – their strong sense of social activism combined with creative marketing and a focus on building loyalty has proven to be a winning formula.

Answer: Ben & Jerry’s has a purpose-driven business model tied into the idea of “linked prosperity” – that is, ensuring that when a company thrives, everyone linked to that company, from suppliers to employees and even customers, also thrives.

Other Businesses with Similar Values

Ben & Jerry’s values are all about fairness, equality, and making the world a better place, but while the brand may be unique in many respects, they’re not alone in holding these values.

Companies with similar aspirations include:

Another brand in the food and drink space, Chipotle is as famous for their “Food with Integrity” brand as they are for their delicious burritos and focus on using natural ingredients and making a positive impact on the world.

The supermarket chain promotes values such as “creating profits and prosperity” and “practicing win-win partnerships with supplierS” – similar to Ben & Jerry’s value of “linked prosperity.”

Like Ben & Jerry’s, non-profit Cradles to Crayons divide their mission and values into three distinct parts focused on identifying the needs of children and fulfilling those needs in a sustainable and ethical manner another great example of a purpose-driven approach.