A man with big dreams, Adam Silver, is an American Lawyer and Sports executive. He is the current commissioner of the National Basketball Association, also known as the “NBA.” He originally joined the NBA in 1992, holding numerous positions, including chief operating officer and deputy commissioner.

I believe that Adam is a highly passionate person with strong ambition, mission, and values. He has given his life to making advances in the league and pushing the NBA to grow. He has solved many of the issues they’ve come up against recently.

Throughout this Adam Silver bio, I will be taking a look into Adam’s life, both professionally and personally, and although he’s somewhat of a private person, I will be uncovering everything I can to tell you all you need to know about life of Adam Silver. Adam was born in April 1962. His father was Edward Silver, and his mother was Melba Silver. His parents raised him with traditional Jewish-American values while he grew up in Rye, New York.

During his childhood, I think he first started to show an interest in the New York Knicks. Within no time, he was an avid supporter.

Regarding his studies and education, he began schooling at Rye High School, where I am guessing he achieved pretty high grades, considering he later moved on to study at Duke University, where he received his bachelor’s degree.

In 1988, he qualified as a lawyer from the University of Chicago. While studying for this degree, he worked for Les AuCoin as a legislative aide.

Silver first began his career with the NBA when he was working as Deputy Commissioner and chief operating officer. He held these positions for eight years before becoming the commissioner, the transition to the role was easy as there were no other competitors for the position due to his deputy title.

During his time as deputy, his role included negotiating the league’s last three bargaining agreements with the National Basketball Players Association, the partnership with Turner Broadcasting to manage the NBA’s digital assets, the creation of NBA China, and the development of the NBA and WNBA Development League. He played such a significant role in some outstanding achievements, which I think all point to his eventual success as commissioner.

While working with NBA entertainment, he was executive producer of the IMAX movie Michael Jordan to the Max, and a documentary called Whatever Happened to Michael Ray? He was also on the production side of Like Mike and The Year of the Yao.

You can read more about members of the NBA, including how the second wealthiest agent in the company rewrote the rules.

In 2015, Silver was endorsed by David Stern, which meant he was the next in line for the role of NBA commissioner. Stern announced that he was stepping down in 2014, which is when Adam took over in his place. (2)

In 2014, TMZ Sports released a video (which I have included in the video links below) of Los Angeles Clippers owner Donald Sterling having a conversation with his girlfriend, which consisted of some rather racist remarks. Silver responded to this by banning him from the NBA, and all its events, for life, a bold move that I think won him some positive attention with the general public.

As well as the ban he gave Sterling, he also fined him a whopping $2.5 million and stripped him from all his authority over the Clippers. He even urged owners to vote to remove Sterling from ownership of the Clippers. The end result was that Sterling was not allowed to enter any Clippers facility. This was one of the harshest punishments ever imposed on a professional sports owner. (3)

In 2019, the general manager of the Houston Rockets, Daryl Morey, published a tweet supporting the 2019/2020 Hong Kong protests. (4) The tweet was deleted shortly after, and Morey and the NBA both later tweeted, referring to the original post stating that he never meant to cause any offense. The NBA stated that the post was “regrettable,” though I think that meant “shameful and embarrassing.” As you can imagine, these posts drew a fair bit of negative attention and received a lot of negative criticism.

The tweet ended up causing more trouble than it was worth, especially after Silver defended the comments, claiming that people had the right to their own opinions and it was expected that people have different views on specific topics; this comment was a risky one, and almost cut ties with the NBA. Eventually, Chinese smartphone manufacturer Vivo suspended all cooperation with the NBA. (5)

On the 11th of March, 2020, like most events across the globe, Adam suspended the 2019/2020 NBA season due to the pandemic. Once ready to resume, it was announced that 22 of the 30 teams in the NBA bubble would participate, and a $170 million investment was to be made to ensure the safety of the players, coaches and completion of the season. (6)

Watch more about the racist comments made by Donald Sterling which I discussed earlier.

See what Adam has to say about the Controversy with China.

Listen to Adam talking about the 2021/2022 and improvements that the NBA plan to make to improve their success.

After the fallout with China over remarks made on Twitter, the NBA lost millions in revenue. China again started airing the NBA games in late March, but the money lost during the blackout was immense and impacted the company.

Despite the losses, Adam has never regretted his decision to stand up for Daryl and his right to freedom of speech, which I suppose you have to admire. If you’re interested in some more controversial views you should have a read of the biography of Travis Kalanick.

On the subject, Adam said, “Others since then have spoken out about their views around China and other places in the world, and if the consequences are that we’re taken off the air, or we lose money, we accept that,”

Adam’s wife is an American interior designer called Maggie Grise. Maggie probably wouldn’t be in the public eye as much as she is today was she not for her partner, Adam. There isn’t much known about her private life other than her relationship and children. Even the names of her parents remain unknown.

After a long-term relationship, the pair eventually married in 2015. They have two children together. We don’t know the name of the youngest daughter, born in 2020, and the couple has kept any details about their little girl very private. The eldest daughter, born in 2017, is called Louise Burns Silver and is currently studying at a private school. 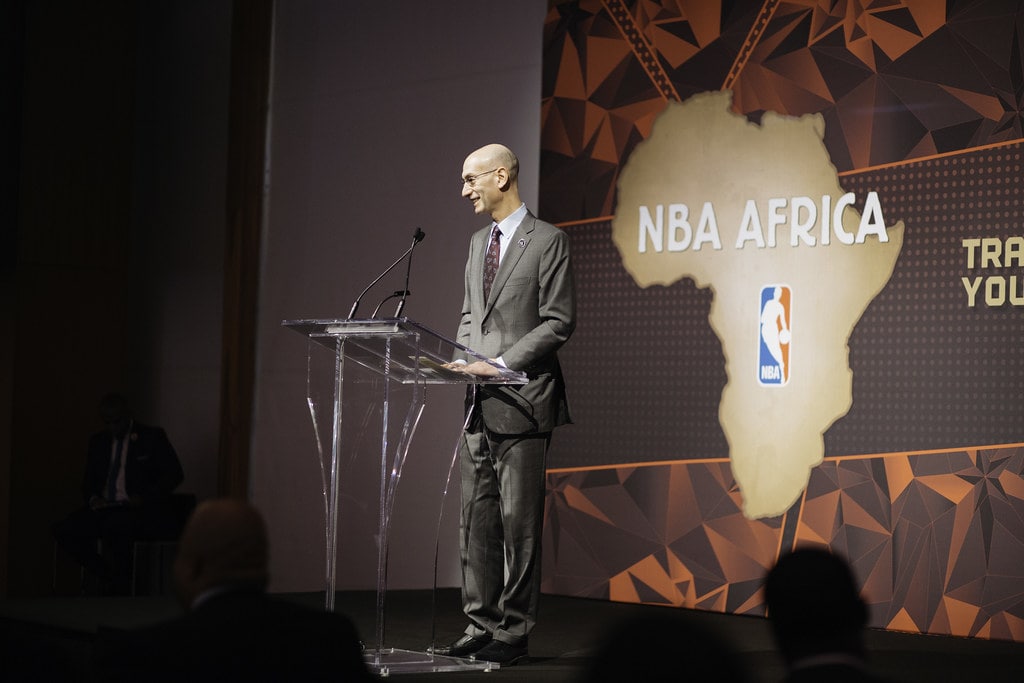 You won’t be surprised to learn that Adam’s yearly salary is a sum that some of us can only dream about. In 2018, his contract with the NBA was extended to 2024. By that end, he will have made $100 million from the league. His estimated yearly salary is around $10 million, but this can vary due to bonuses, etc.

His current net worth stands at $40 million.

There is no information known to the public about where Adam lives, how many houses he owns, or how much his homes are worth, another aspect of his life I presume he wants to keep private. I would imagine, though, given his wife’s profession as an interior designer, that whatever homes they do have are beautifully and creatively designed.

Let’s look at some of Adam’s statements surrounding his career, decisions and controversies, and some general quotes on life.

“We didn’t see the NBA lockout as a victory at all. It was far from what we planned to accomplish in bargaining, but I thought it was a fair compromise.”

“Earl Lloyd, the first African-American to play in an NBA game, was as inspirational as he was understated…His legacy survives in the league he helped integrate.”

“Let me be clear. Any new approach must ensure the integrity of the game. One of the most important responsibilities as commissioner of the NBA is to protect the integrity of professional basketball and preserve public confidence in the league and our sport. I oppose any course of action that would compromise these objectives. But I believe betting should be brought out of the underground and into the sunlight where it can be appropriately monitored and regulated.”

“There is absolutely no reason why a woman will not ascend to be a head coach in this league.”

Question: What Did Adam Say About Celtics Fans at TD Garden?

Answer: He praised the fans, stating that he “loved the energy Boston fans bring to the game.”

Answer: The answer is no. Silver has never played basketball at any significant level. His first primary profession was actually a lawyer.

Question: What Law Firms Did Adam Work For?

Answer: After he finished law school, Adam worked as a law clerk for Judge Kima Wood of the U.S District Court for the Southern District of New York. He was later an associate with the law firm Cravath, Swaine, and Moore.