Though his innovative spirit accounts for a significant percentage of his success, his efforts to ensure society’s welfare have also paid him both in cash and in-kind.

In 2016, Dorsey sacrificed almost one-third of his Twitter shares to his company employees. This is not to mention the Covid 19 grant, which took 28% of his total wealth, Forbes.

Read through Jack Dorsey’s biography below to learn more about his inspiring story of success. Siblings: Jack has two brothers, Andrew and Daniel Dorsey but has no sisters.

Children: Dorsey has no children. He considers Twitter and Square Inc., as his children, the Newyork Times.

Salary: Before 2019, Dorsey received zero salaries from his two companies. In 2019 he received $1.40 from Twitter and $ 3 from square Inc., with zero bonus in both companies. 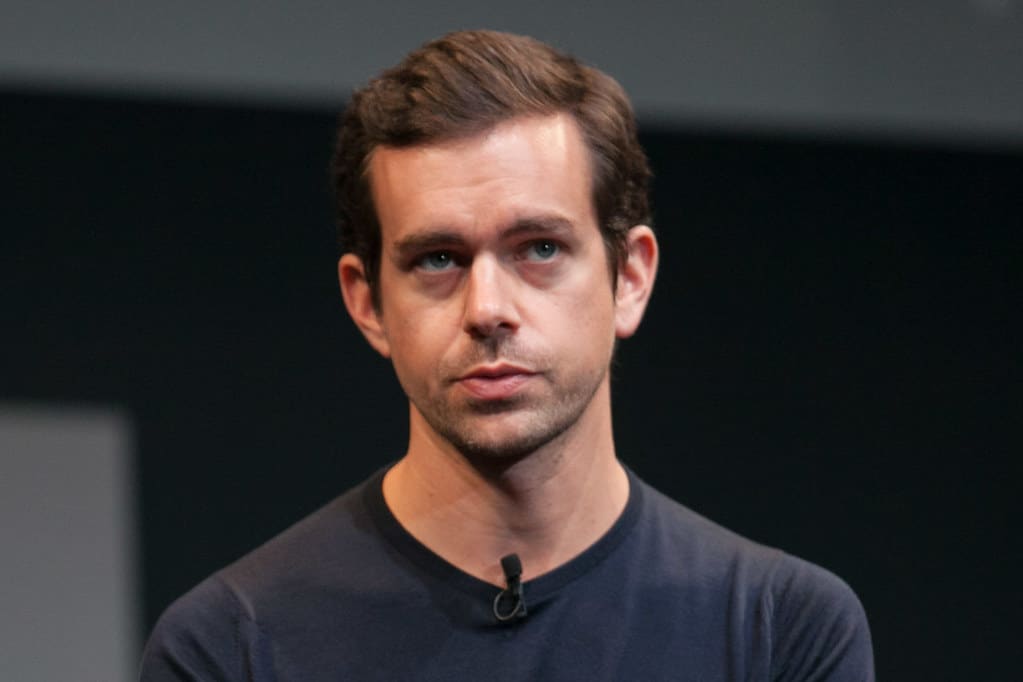 Jack Dorsey was born on November 9th, 1976, in St. Louis, Missouri, where he was brought up. Thanks to his parents, Marcia Dorsey and Tim Dorsey, who nurtured this great mind. He is of English, Italian and Irish descent.

Being a catholic, Dorsey joined Bishop DuBourg School for his high school studies. While still at high school, he would occasionally design fashion models, a hobby that he would have turned into his career if things did not work with his technological endeavors.

However, his interest in the technological world took the biggest portion of his heart. And, at the age of 14, Dorsey was already trying to revolutionize dispatch routing. He took part in a technological challenge to facilitate real-time communication coordinate delivery vans, taxi drivers, and other vehicle fleets to enhance their working efficiency.

His efforts in dispatch routing earned him a great reputation when he successfully created dispatch routing software at age 15. Today, some taxicab companies still use dispatch logistics software to enhance their operations.

His main objective behind the company was to dispatch taxis, couriers, and other emergency services. However, reports also show that he also had interests in streamlining some technological hitches in the medical sector.

While executing his duty, Dorsey got too obsessed by the way the police scanners worked, “They’re always talking about where they’re going, what they’re doing and where they currently are, and that is where the idea for Twitter came,” Dorsey, “60 Minutes“.

He thought how efficient his company would be if he came up with a site that merged the dispatch logistic technology with instant messaging. He later collaborated with other great minds (discussed) and gave birth to the social platform we call Twitter today.

To give you a clearer view of how Twitter came into life, let’s take a closer look at Dorsey’s career.

Jack Dorsey is known as a programmer and internet entrepreneur (here are a few business strategy frameworks he uses). His notable achievement that led to his popularity is cofounding the Twitter platform and square Inc. as discussed below. As stated above, Dorsey developed the idea of creating a site that would combine dispatch technology with instant messaging. He consulted about the idea with Biz Stone, a former executive of Odeo, and Evan Williams, an Odeo company’s cofounder.

The three came up with a new company known as Obvious. The reason behind that move was to create an avenue for people to share their statuses efficiently to update their friends on their current activity.

Two weeks later, Dorsey came up with a simple site to send short messages (tweets) not exceeding 140 characters. The platform later developed into twitter. Dorsey became the new Twitter CEO and later the chairman in 2008.

Immediately after its launch, the site had frequent service outages. Some critics like Conan O’Brien thought the site was just for the ‘low class.’

However, people stopped deriding the platform when some top politicians in the United States like Barack Obama and John McCain used the platform to provide their supporters with live updates about their political campaigns.

The popularity of Twitter grew even more in June 2009 when thousands of Iranian opposition supporters filled the streets to protest against the victory of Mahmoud Ahmadinejad. Upon the closure of the text messaging and satellite feeds of foreign news coverage, the protestors used Twitter to update the world.

A prominent state official in the U.S. even mailed Dorsey requesting him to postpone the platform’s scheduled maintenance favoring the protests. “It appears Twitter is playing an important role at a crucial time in Iran. Could you keep it going?” said P.J Crowley. Dorsey accepted the request.

The wide application of the platform gave rise to yet new challenges. The system could develop frequent outage issues. And, since the system lacked a backup, the users of Twitter could lose their data frequently.

The frequent outages attracted the attention of Williams and Fred Wilson, who concluded that Dorsey was not fit to lead them as the CEO. The pair cited Dorsey’s tendency to leave the job early for his yoga and fashion classes as the cause of his poor performance in the company.

“You can either be a dressmaker or the CEO of Twitter. You can’t be both,” said William.

The unceasing wrangles attracted other board members, who assisted William and Fred Wilson in kicking Dorsey out of the company he created. William then replaced Dorsey as the CEO.

Dorsey could not sit down and focus on the past. After being ousted as the Twitter CEO, he met with his longtime friend, McKelvey, who needed assistance selling his glass faucets. Before they met, McKelvey couldn’t sell faucets worth $ 2000 because he lacked a system that could accept credit cards.

The pair joined hands to start a company that could develop a system that would read credit cards. They called the company’ square,’ in reference to the squared shape of most card readers.

During this time, Dorsey would not let his antagonists on Twitter use the work of his mind in peace. Indeed, he continued to undermine Williams and the other board members on social media.

Besides the critics from Dorsey, William had other management issued, and the management fired him in October 2010.

Dick Costolo replaced him as the new CEO. I can say that dick took the position at a critical point when everything in the company was heading south. He was unable to refine the company’s long-term vision and resigned on June 10th, 2015.

Following the poor management and performance of the platform, the board members had no option but to go back to Jack Dorsey. They named him as the permanent CEO on October 5Tth, 2015. That was after three months of long-term search by a team that included Williams. This must have been shameful to William.

Among the interviews Dorsey has held include;

Fortunes started to befall Dorsey in November 2013. Twitter’s initial public offering shifted its share price from $26 to $45 during the first trading day. With more than 23.4 million shares in the company, Dorsey turned into a billionaire within hours. In 2008, the MIT Technology Review TR35 listed Dorsey among the top 35 technological innovators in the world below the age of 35 (check this business mission and value statements that have kept him grounded).

In 2012, Dorsey won the innovator of the year award for technology from wall street journal. Additionally, tech crunch awarded Dorsey as the year’s founder during their 5th annual crunchies awards in 2012.

That is not all. Forbes considered Dorsey as the most eligible bachelor in 2013.

Dorsey is a son to Marcia Dorsey and Tim Dorsey. He is a brother to Andrew and Daniel Dorsey, who are his siblings. He was not lucky to get sisters. Additionally, Dorsey is not married at the time of this writing; neither is there information about his new relationship.

Some of the billionaire famous quotes include;

He made this quote to create clarity for individuals who did not understand the reason for his two companies, Twitter and square inc.

“Despite all that we have accomplished, Twitter still has huge unmet potential.”

The statement was for encouraging Twitter users to continue using the account in anticipation of more platform advancements in the future. After all, opportunities never end for those who are savvy in identifying them.

According to a report by Variety, Dorsey has recently bought a luxurious home worth $21.9 million. The new abode, located in the Seacliff neighborhood of San Francisco, occupies more than 3500 square feet. Its most notable features include 5 bedrooms and 3 bathrooms.

His other real estate property includes his old home, which features a midcentury modern house. Sources show that Dorsey had acquired the property in 2012 for $ 10 million. It is also located in San Fran’s swank Seacliff neighborhood.

That is not all. The young billionaire also owns a property worth $ 4.2 million in Los Angeles, where his girlfriend Raven Lyn Corneil lives.

Answer: He got the idea from his long-time friend and boss McKelvey from St. Louis. Initially, McKelvey could not sell pieces of his art due to the lack of a system that could read credit cards. The two joined hands and created the company that would design such card readers. They named it square.

Question: Does Jack Dorsey have a girlfriend?

Answer: Rumors say that Dorsey is dating Raven Lyn Corneil, a sports illustrated model who is believed to be residing in his apartment in Los Angeles. According to sources, the pair was spotted together at Harper’s Bazaar Icons party during the New York Fashion Week.

Answer: Yes, both of his parents are alive. You can have a look at the latest tweets from Tim and Marcia.