Bill Gates is an American-born billionaire who is most associated with Microsoft. He has also worked extensively with his private charitable organization – the Bill & Melinda Gates Foundation – and has a net worth of $146 billion.

Gates was born in Seattle, Washington, and comes from a prosperous family. His father was a renowned lawyer, and his mother sat as a director on several boards. He grew up alongside his two sisters – Libby and Kristianne Gates – and married Melinda Gates (nee French) between 1994 – 2021. Gates attended Lakeside Prep School, where he met the future co-founder of Microsoft, Paul Allen.

Gates started his first company in 1972 (Traf-O-Data), and although it wasn’t a success, it set the basis for his eventual domination of the computer market with Microsoft. A co-founder of the computer giant, Gates and Paul Allen established Microsoft in 1975, and the company now has an estimated worth of $1 trillion.

The Bill & Melinda Gates Foundation has distributed over $7.8 billion worldwide to many charitable causes. This includes work with HIV/AIDS, malaria, and various Global Grand Challenges projects.

Bill Gates was born in 1955 in Seattle, Washington, and comes from a successful family. His mother served on several boards as a director (including First Interstate BancSystem), while his father was a successful lawyer. He grew up alongside his two sisters – Kristi and Libby – and he wrote his first software program at the age of 13.

Gates had a strong interest in computers and technology from a young age. He attended Lakeside Prep School, where he co-founded the Lakeside Programmers Club and helped create a school-scheduling system. During this time, Gates met future Microsoft co-founder Paul Allen, and the two worked on several computer programs during their time at Lakeside.

An early Gates and Allen initiative was Traf-O-Data which was formed in 1972. The idea was to help process traffic data quicker and more cost-effectively for state and local governments.

In 1973, Gates enrolled in Harvard College, where he studied mathematics and computer science but dropped out after two years. 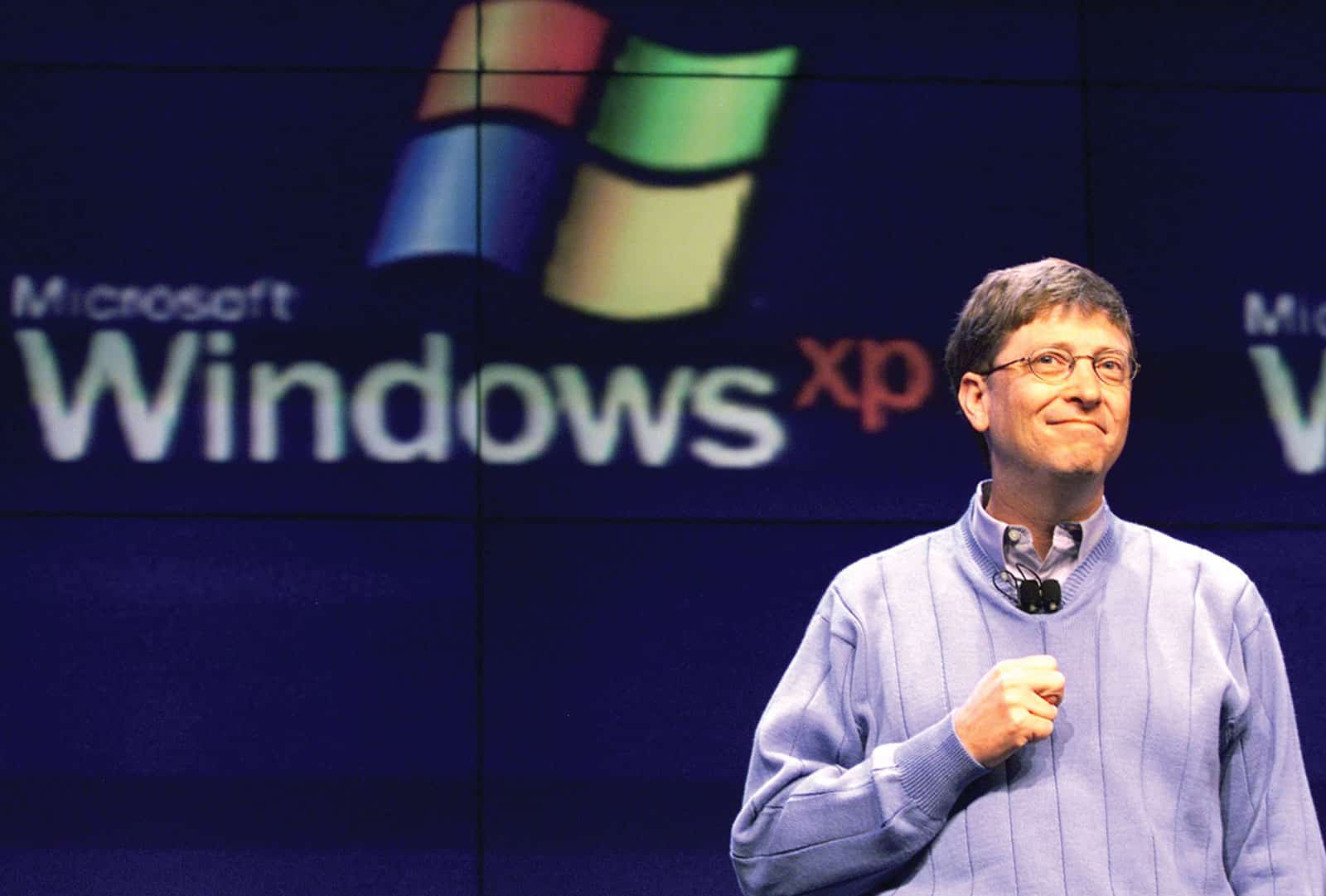 He co-founded the company in 1975 alongside school friend Paul Allen. The inspiration came from seeing the release of the first microcomputer, the Altair 8800, and the potential for creating a user-friendly computer system.

The first publicly released operating system from Microsoft was in 1980 and even featured an early version of Microsoft Word.

In the 1980s, Microsoft really began to take off, and the restructure in 1981 saw Gates become President and chairman of the board. IBM released a personal computer the same year, which featured MS-DOS 1.0, and in 1984 the company went public. In 1984, they generated $55 million, and Microsoft was described as the “most influential company in the microcomputer-software industry” by Infoworld.

They raised $61 million with their IPO in 1986 (at $21 per share, which grew Gates’ net worth to $350 million), and by 1987 Microsoft had established itself as the largest provider of personal computers in the world. Gates became a billionaire at aged 31 in 1987.

Windows 95 completely changed the personal computer landscape as a renowned ‘plug-and-play’ computer which saw massive success for Gates and Microsoft. Windows 98 and Windows XP were another two highly successful Microsoft operating systems while Gates was CEO of the company.

In January 2000, Gates stepped down from CEO of Microsoft (he was replaced by Steve Ballmer, whom he met at Harvard), although he stayed as chief software architect until scaling back from day-to-day activities in 2008.

Bill Gates shares his top 10 rules for success with clips from speeches throughout his career.

Bill Gates sits down for an interview with 60-minutes’ Anderson Cooper and discusses climate change and how innovation is needed to solve the problem.

Bill Gates talks with Village Global on the future of technology, early-stage investing, and the nature of innovation.

Microsoft grew into one of the most recognizable companies worldwide and turned Gates into a billionaire; however, not all of his initiatives have been successful.

The early venture – Traf-O-Data – failed. Paul Allen, who co-founded the venture, described it as a good idea with a flawed business model. As a result of a lack of market research and capital commitments, the business had net losses of $3,494 in 1980 and closed shortly after.

Perhaps not a ‘failure’ as such, but the Bing search engine, which was designed to rival Google, hasn’t had the success many of Microsoft’s products and services have enjoyed. Bing was released in 2009 (although Gates had taken a big step back from the company by this point); however, it is only the third-largest search engine with just 4.58% (compared to Google’s 77%).

Brad Silverberg, a Senior VP in Microsoft between 1990–1999, commented that Bill Gates failed to see the internet’s full potential. He described Gates as being wholly protective of Windows to the point of not adapting it effectively online, and this allowed other companies such as Google and Apple to gain a significant market share. 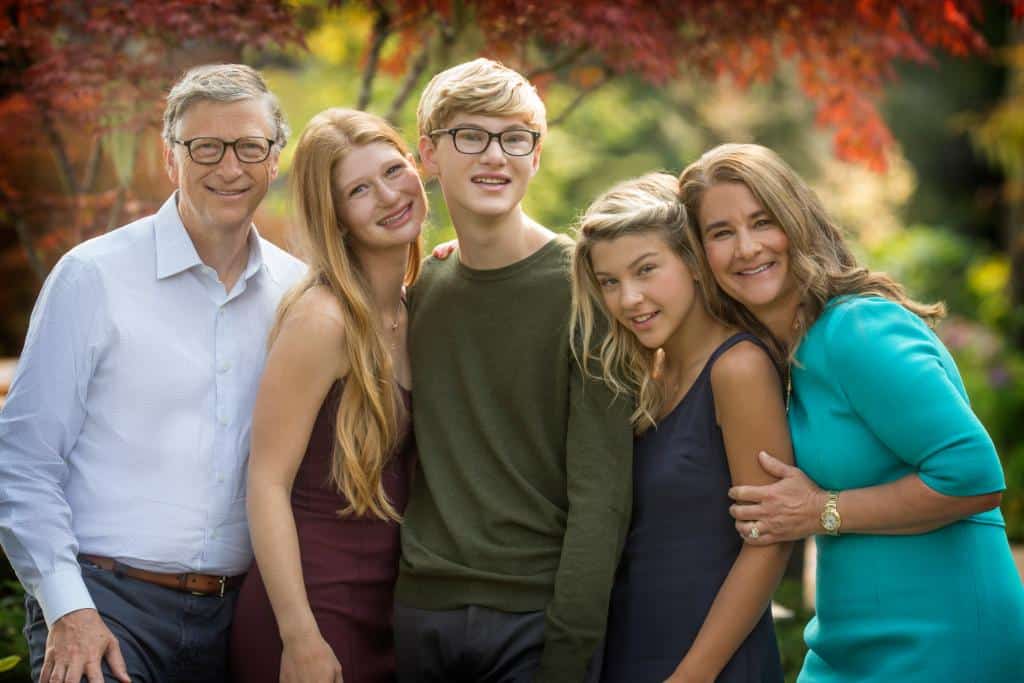 Bill Gates and Melinda French married in 1994, and they have three children. The couple officially divorced in 2021, although they had been in contact with divorce attorneys since 2019.

He comes from a successful family as his mother served on the board of several companies while his father was an esteemed lawyer. In addition, his maternal grandfather, J. W. Maxwell, was the President of a national bank.

Gates has two sisters – Libby And Kristianne Gates. Kirstianne (now Kristianne Blake) is an attorney who specializes in personal financial planning, while Libby (now Libby G. MacPhee) is the Managing Partner of Seattle Family Support, LLC, and has worked in governance roles of educational institutions for over 20 years.

Currently, he is estimated to be the fourth richest person on the planet, and his wealth continues to grow. In the past year, it is estimated that he has earned $1,300 per second.

This includes his primary residence, a 66,000-square-foot mansion in Medina, Washington, and he has spent around $63 million renovating the property. He purchased it for $2m in 1988, but now it is worth $130 million.

These aren’t the only pieces of real estate he owns. Gates bought a 492-acre ranch in Wyoming for $8.9 million in 2009, a San Diego beach house, and his personal investment firm, Cascade, makes many high-end real estate investments, including nearly 50% of the Four Seasons hotel chain.

“Success is a lousy teacher. It seduces smart people into thinking they can’t lose.”

“Patience is a key element of success.”

“Don’t compare yourself with anyone in this world … if you do so, you are insulting yourself.”.

“It’s fine to celebrate success, but it is more important to heed the lessons of failure.”

Answer: Yes. Bill Gates attended Harvard College, where he studied mathematics and computer science, but he dropped out after two years.

Question: What is Bill Gates’ net worth?

Answer: Bill Gates was married to Melinda French from 1994 up until their divorce in 2021. They have three children together.

Question: Is Bill Gates the founder of Microsoft?

Answer: Bill Gates is the co-founder of Microsoft. The company was established in 1975 alongside school friend Paul Allen, although Allen would step back from the company after being diagnosed with Hodgkin’s lymphoma in 1982.

Answer: No. Bill Gates now dedicates his time to his philanthropy work at the Bill & Melinda Gates Foundation. He effectively stepped back from day to day with Microsoft over ten years ago and resigned from the board of directors in 2020.

Question: Is Bill Gates the richest person in the world?

Answer: Not anymore. He held that title for many years from 1995 up until 2017 (with a few years when his wealth slightly dropped). He is now the fourth richest person in the world, with a net worth of $146 Billion.

Question: How many homes does Bill Gates have?

Answer: His primary residence is a 66,000-square-foot mansion in Medina, Washington, although he also owns ranches in California and Wyoming and a San Diego beach house. In addition, his personal investment firm, Cascade, has investments in many high-end real estates, including the Four Seasons hotel chain.